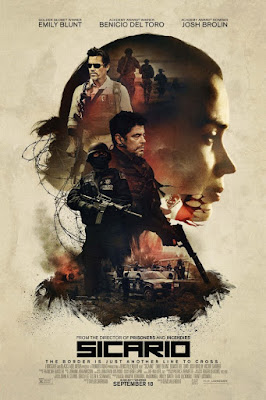 I remember seeing the trailer to Sicario in cinemas back in 2015 and thinking, "damn, that looks good", then somehow I managed to miss it and for some reason or another I kept putting it off. In the meantime, I watched Hell or High Water and Wind River, both written (and the latter also directed) by Taylor Sheridan and having loved both I figured it'd make sense to check out his first work. Also, this movie is getting a sequel this year and it's basically one of the most anticipated films of the year so, yeah, I had to watch this.

After surviving an explosion following the discovery of a house with dozens of corpses, idealistic FBI agent Kate Macer (Emily Blunt) joins a special anti-drugs task force run by Matt Graver (Josh Brolin) that operates on the border area between the U.S. and Mexico. With the help of the mysterious Columbian-born Alejandro (Benicio del Toro), their ultimate goal is the capture or kill of cartel boss Manuel Diaz (Bernardo P. Saracino).

There's a lot more to the plot but saying anything else would spoil the film if you haven't seen it yet. Anyway, it's a pretty simple and straightforward plot, there are some twists along the way but nothing jaw-dropping and yet it keeps you glued to the screen, guessing what will happen next, what the objective of the mission really is until it unravels at the end. What's more important is the message the story delivers. In a few words, it says that all the U.S. and other foreign involvment in the war on drugs has only made the situation worse.

What makes the story more interesting is that we see it through the eyes of an ingenué, someone who believes it's all black and white and that there's nothing in between. That's what makes the main character, Kate Macer, so interesting too. The character is paper-thin, with no development whatsoever --we only learn that she is divorced and hasn't had a man in years. She is completely irrelevant to the story, many said, but she isn't. *SPOILER*If you follow the story instead of, I don't know, thinking about how hot Emily Blunt is or whatever, then you know there's a reason for her to be in the film, and it's to legitimize the operation of the CIA because they cannot operete on domestic soil without a federal agent*SPOILER* Also, her being the typical agent who always follows the rules allows us to see the collision between the black and white and makes the blurry line between good and evil more clearly. Emily Blunt does a really good job at capturing the struggle and inner conflict of her character, her difficulty to adapt.

The other main characters are thin too, especially Josh Brolin's Matt Graver who comes off just as an asshole. Benicio del Toro's Alejandro is given some backstory but he doesn't have any more depth that Brolin's. That said, both actors, especially del Toro, give good performances. Some of the other members of the cast, Daniel Kaluuya and Jon Bernthal, also make a good use of their small screen time.

In addition to Sheridan's screenplay and soling acting, Sicario also benefits from Denis Villeneuve's direction. The guy knows how to build tension and the movie shows it. Though there aren't enormously tense scenes, Villeneuve managed to keep the tension high thoughtout the entire film and delivered some nice and tense action sequences.

The film also has an outstading score by the late Johann Johannsson, amazing sound editing, and a flawless cinematography by (finally Academy Award winner) Roger Deakin.