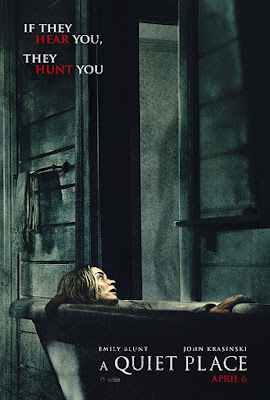 I heard about A Quiet Place for the first time last week, when everyone on Twitter was saying how good it was. I never even saw a trailer on TV which is why I thought I would have to wait months before seeing what all the fuss was about. Turns out it's in cinemas since April 5 and my cinema didn't even bother telling me it in the weekly email. Anyway, I got there as soon as I could (yesterday afternoon) and I'm not sure words are enough to describe how glad I am I saw this movie.

Set in the near future, A Quiet Place is about a family who lives in solitude and is forced to live in absolute silence as there is something that lurks in the shadows and waits for noises to attack.

The premise is very simple, as you can tell, we get absolutely no backstory nor explanation to what is going on, and the plot isn't perfect --there are some holes and some conveniences-- but don't you dare think this is just another horror movie because it's not. And the credits go to every single person who worked on this film.

First, kudos to John Krasinski. It takes more than great skill to take a simple story like that and turn it into something that grabs your attention right from the start, keeps you glued to the screen and on the edge of the seat, literally, and makes you feel uncomfortable and genuinely fearful from start to finish. I was not expecting him, Jim from The Office, to be able to build, so slowly and cleverly, so much tension and suspense throughout the film. There isn't even a single dull moment.

Also brilliant is Krasinski's choice to make the story about the family, not the monsters/aliens like they usually do in horrors. Even though the family, just like the monsters, has no backstory whatsoever and we know very little about them --maybe they were the monsters before this sort of apocalypse happened, who knows--, they are developed in a way that you end up caring about them and make you emotionally invested in the film (I even cried, there's no point in lying). Never before I felt so connected to the characters in a horror and genuinely hoped for a positive outcome (I usually hope they all die).

Then there's the scare factor. Unlike your average horror, A Quiet Place does not rely on blood and gore to scare you and keep your heart racing --there's some of both but they are kept at a minimum-- but on a mixture of great storytelling and astonishing use of sound. Even quiet scenes manage to be scary in this film as they leave you in fear of a sound being made. Even the sound of someone eating popcorn in the movies will scare you if anyone even dares eating while watching this film (not a single person ate or talked during this film, not even during the ending credits). And the brilliant score by Marco Beltrami, which is kept to a minimum, only adds to the film's tension and makes you feel even more like you're experiencing all that along with the characters.

At last, and I hope I didn't forget anything, there's the acting. I have to say I wasn't crazy about Emily Blunt, John Krasinski's wife, playing John Krasinski's character's wife, but I changed my mind right after seeing this. She gives an astonishing performance as she delivers a wide range of emotions. John Krasinski also does a wonderful job as the husband and father, perfectly showing desperation through his eyes, and the chemistry between the two is obviously amazing. Then there are the child actors, Noah Jupp and Millicent Simmonds, the latter being the standout. I'm sure many will say the filmmakers played it safe with the casting of a deaf actress, Simmonds, to play a deaf character, but I think this only adds authenticity to the film --and I loved that there's a complete lack of noise when the film is from her point of view.