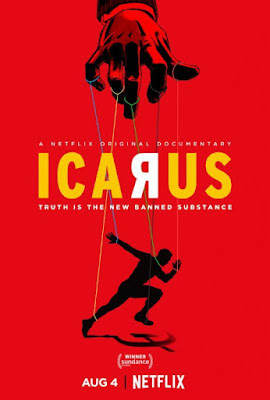 Though I don't have any interest whatsoever in Olympic sports (I'm happy if the country I "root" for wins gold medals but it's not like I'm watching or anything. I'm a football/soccer kind of person), I checked out Netflix's Icarus anyway because of the Oscar nomination (I watched this a few days before the Oscars. This one's the winner).

In a few words, this documentary, co-written and directed by Bryan Fogel, follows Fogel himself as he tries to discover the truth about doping in sports. Fogel's first intention is to explore the option of doping to win an amateur cycling race and see how these drugs affect his performance, but eventually, he finds himself caught up in something much bigger than he had anticipated, the scandal that uncovered Russia's state-sponsored Olympic doping program.

Icarus is essentially two documentaries in one. The first, simple and yet the most interesting, portrays the doping in cycling and sports in general. It is about Fogel's personal experience and journey with a supported plan of doping. Fogel's goal not only is to put himself to test but to show how ordinary cheating in sports is and proves how easy is cheating and getting away with it.

This personal journey of him brings him in contact with Russian scientist Grigory Rodchenkov and after that, the documentary becomes a whole different thing. This second documentary/part is both the personal story of Rodchenkov --it indeed feels like a biographical documentary-- and the exposure of the doping scandal.

That's when I started having issues with Icarus. This is easily the most complex of the two, but Fogel's approach to it is a bit shallow, too simplified. It feels like there's something missing from the Rodchenkov interviews and there's really nothing you can learn from this documentary other than what you would learn from watching interviews or reading articles online. Also, it's all a little confused and at the end, it's not even clear what Rodchenkov's role in all the doping program was. Nor whether we are supposed to consider him a victim or an evil man --because he's Russian and that's basically what the documentary says about Russians.

Then there's this thing about doping being ineffective on Fogel which made me wonder if he was trying to say that only because Russian athletes did cheat and used drugs to enhance their performances it doesn't mean the drugs actually worked and gave them an advantage.

In spite of that, Icarus is a pretty solid documentary that holds your attention throughout from start to finish and it's definitely worth watching.