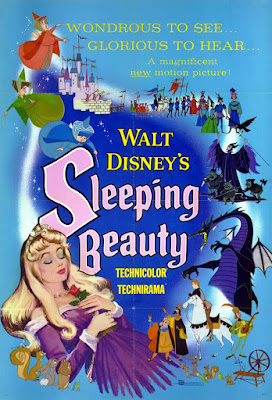 Sleeping Beauty is one of the movies I grew up with, one of those I would watch over and over again. And yet, it was never one of my favourites. The reason? The story just didn't do for me. In fact, I could remember very little about this film's plot before rewatching. And I still feel the same, there's just something off about it.

When a new princess, Aurora (Mary Costa/Helene Stanley), is born, the entire kingdom rejoices and attends the ceremony to celebrate her. Everything is perfectly fine until Maleficent (Eleanor Audley) shows up and curses the baby and announces that before the sun sets on Aurora's 16th birthday, she will die by pricking her finger on the spindle of a spinning wheel. To protect their daughter, King Stefan (Taylor Holmes) and his wife (Verna Felton) place her in the care of three good fairies, Flora (Verna Felton/Frances Bavier), Fauna (Barbara Jo Allen/Madge Blake), and Merryweather (Barbara Luddy/Spring Byington). Everything goes according to plan until Aurora, on her 16th birthday, meets Prince Philip (Bill Shirley/Ed Kemmer).


I shouldn't be complaining about the story because that's how the original tale was, but there's nothing new year. It's the typical boy meets girl, they fall in love and live happily ever after kind of story. There are a few obstacles here and there, but the ending doesn't get any more predictable. Also, it's pretty much a copy of Snow White and the Seven Dwarfs (which is almost 20 years older than this one, so I don't see the point in making this), only with fairies instead of dwarfs.

The plot isn't the only problem with Sleeping Beauty. The characters aren't that good either. Actually, more than the characters, the characters the filmmakers decided to focus on, the three good fairies. If they were so much more interested in developing them, they should have made a movie about them instead. The three fairies are also the most interesting and likeable characters, not because they fight over the colour of the dress or for the stupid way Fauna tries to make the cake without magic --though both scenes are fun-- but because they have a personality. Aurora and Prince Philip are forgettable, to say the least, and Maleficent could have been a great villain if she was given more screen time.

On the other hand, the songs are nice and catchy, but not so good and catchy to get stuck in your head. They fit the film and all but they don't stick with you much longer. The animation is still very beautiful. The colours are nice, the backgrounds are beautiful, the characters move so fluidly and there's quite a lot of attention to details.